One monument in particular doesn’t seem to fit in with all the others. Its face is pointed south, rather than to the east or west, and its sleek metal seems alien to its stone neighbors. Instead of resting on the ground, the metal slab is elevated about a foot above the ground. And perhaps most strangely, its smooth surface is interrupted by large spokes of different lengths, each seemingly sturdy enough to survive nearly any wear and tear. Like the man it represents, the marker is unique and puzzling. 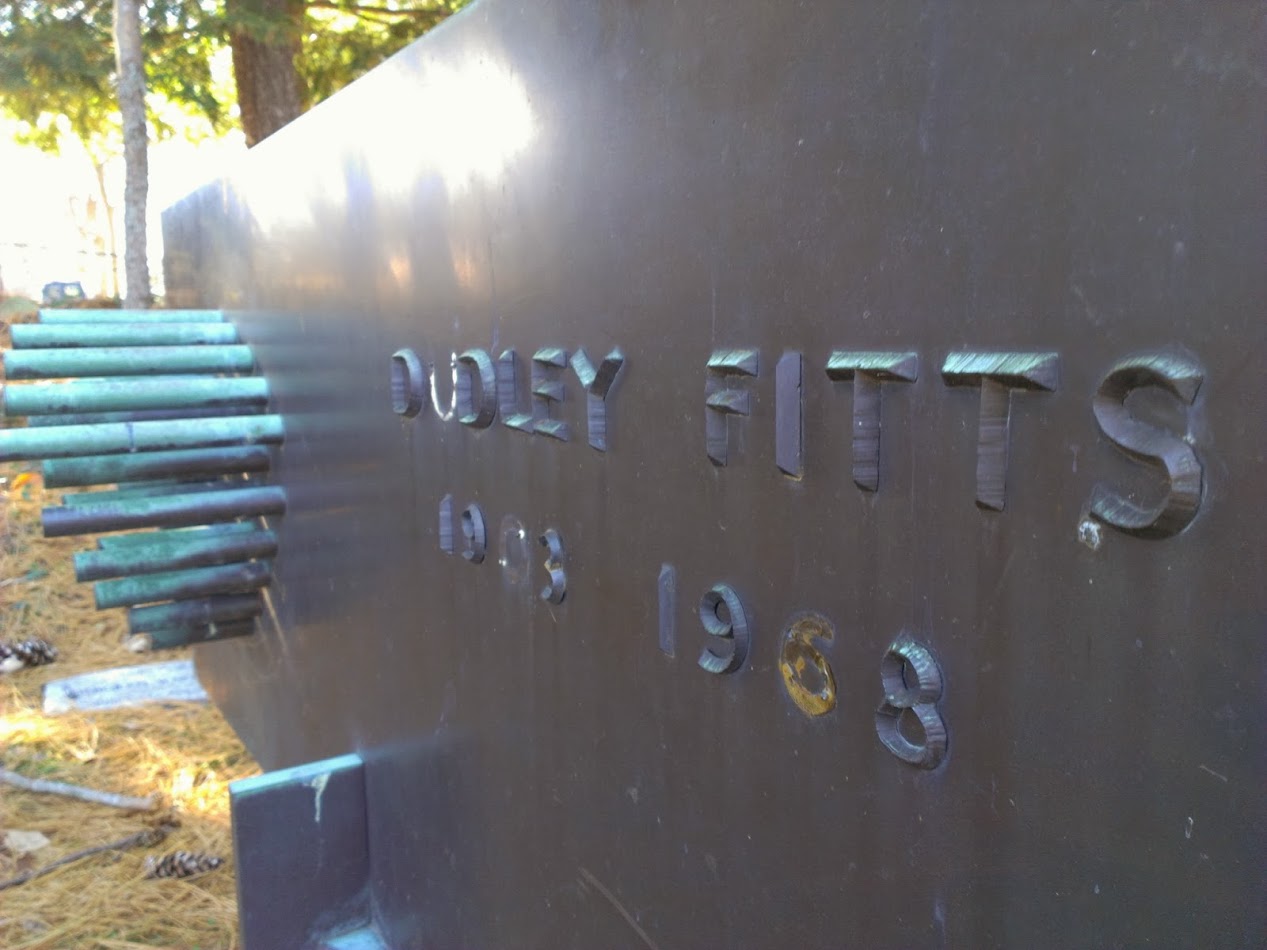 The memorial above Fitts’ final resting place in the Phillips Academy Chapel Cemetery.

According to a passage by Virginia B. Bernard in an omnibus retrieved from an Andover Vertical File, Dudley Fitts was an English teacher at Andover from 1941 until his death in 1968. He previously taught students at the Choate School including Robert Fitzgerald, with whom he would publish several highly-praised translations of classic Greek and Roman literature including The Oedipus Cycle and Antigone of Sophocles. 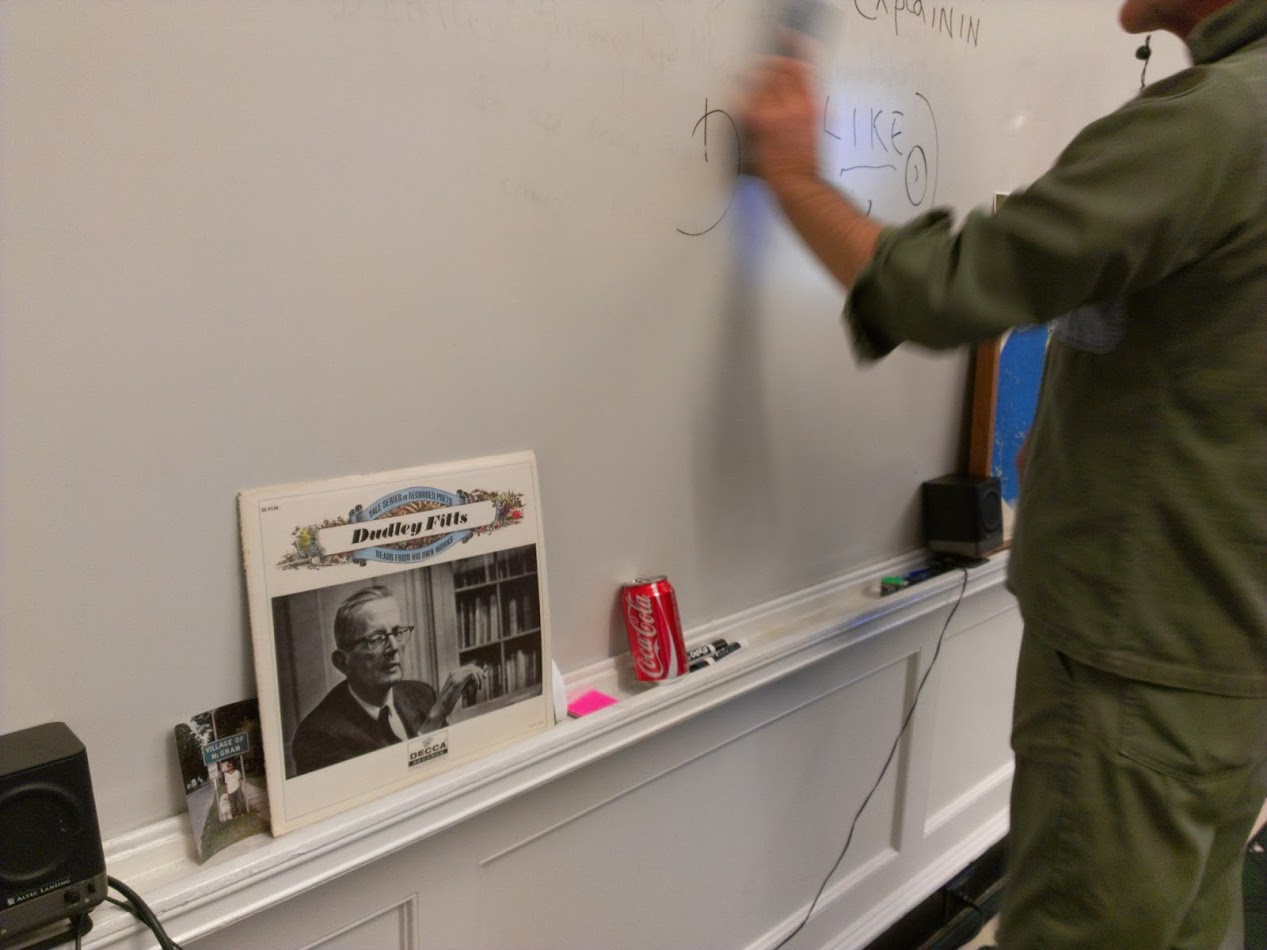 A record of Fitts reading some of his translations sits the whiteboard of his old classroom, currently used by McGraw.

Tom McGraw, who currently teaches English in Fitts’ old classroom he calls “Dudley’s Cave”, said he owed great fealty towards Fitts, who serves as his inspiration for teaching. Several former and current members of McGraw’s English 100 class fondly recalled receiving a packet of photocopied newspaper clippings about Fitts on their first day.

In a letter written to McGraw from Tom Lyons, a history teacher from 1963 to 2000 who died last year, Fitts also received high praise.

“Dudley Fitts was probably the greatest scholar/teacher in Andover’s history,” Lyons wrote. “One day a kid in my dorm said Dudley read Ibsen aloud in class and the boy noticed he was reading more slowly than usual. As he left the classroom he noticed the edition Dudley was reading form was in Norwegian.”

David Slavitt, a novelist and poet from the Phillips Academy Class of 1952, described Fitts’ reputation in a study of him.

“He was famous for his wit and his sarcasm of which we, as an honors group, were prime beneficiaries and victims. It was a matter of pride to be insulted by Mr. Fitts.”

Lyons said in his letter that Fitts didn’t retire until a year before he took his last breath at Lawrence General Hospital.

So what exactly is so special about Dudley Fitts’ grave? If you’d rather try to solve the puzzle for yourself, don’t read further; there are enough hints in the first paragraph to get you started.

The first secret of the grave requires you to get up close and personal. If you lie down and face the sky (the same position that Dudley himself is in just a few feet below) you can see words written on the bottom of the slab:

“And now the quick sun,
Rounding the gable,
Picks out a chair, a vase of flowers,
Which had stood till then in shadow.”

The quote is one stanza of the poem “For Dudley” written in honor of Fitts by Richard Wilbur. 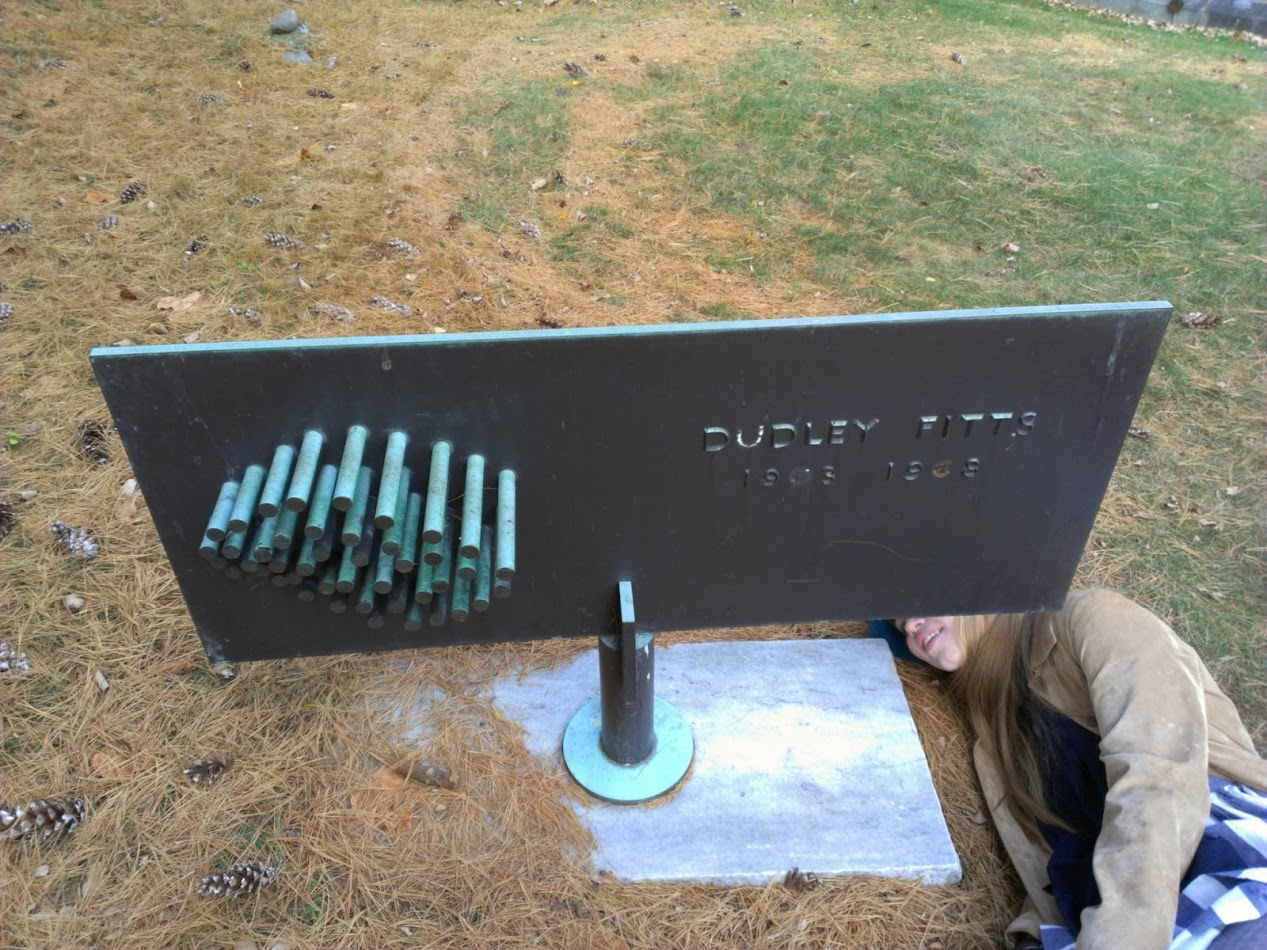 Lily Rockefeller ’14 looks up at the writing beneath Dudley Fitts’ memorial.

The other mystery has to do with the spokes protruding from each side of the monument. Do their shadows make a shape at a certain time of day? Are visitors supposed to hang ornaments from them? No one knows the original intent of the design, but what we do know is that taking a stick or two and running them along the poles makes a beautiful chime.

The next time you’re in the graveyard, try getting up close with this interactive burial site – who knows, maybe you’ll discover something completely new.