This article was originally published on my Wordpress blog on April 11th, 2014, as an assigment for my Spring Term Media Studies class with the byline: "Alex Anderlik is a senior in the Class of 2014 at Phillips Academy but hails from Missoula, Montana. When he's not wasting time on the Internet, he's trying to figure out how to waste more time on the Internet. You can reach him at google.com/+AlexAnderlik."

Television is lit up with sitcom after sitcom after sitcom cataloging the adventures of American family stereotypes, and the hilarious mess they cause whenever they break from the norm. I watched an episode of the hugely successful Modern Family, currently in its fifth season, to see how things have changed since the heyday of the mother of American sitcom: I Love Lucy.

A smash hit which quickly became a landmark of American culture, Lucy was funny when she ran in direct contradiction to contemporary gender stereotypes. Sadly, most of that running was in circles. She brought in the laughs when she said something impolitely or tried to escape the house – where, if less edgy contemporary sitcoms like The Donna Reed Show and Leave It To Beaver are any indication, she was supposed to spend all her time tending.

Ricky, Lucy’s husband, represented the previously-avoided Hispanic demographic. Unlike other sitcoms, he owned an apartment in the city instead of a house in the suburbs. While he was breaking new ground, he did maintain his stereotypical gender role as the family breadwinner and gentleman. He was calm, rational, and unambitious, a complete male foil to Lucy’s unconventional female rebel.

In the episode “The Camping Trip,” Lucy tries to cling to her husband Ricky every moment to prove to herself that they have everything in common, and that their marriage will last forever. When she invites herself to the camping trip Ricky is going to attend with his male friends, Ricky schemes a preliminary camping trip to make Lucy miserable and convince her not to go with him to the men-only wilderness vacation.

Ethel, their landlady, overhears his plan and decides to help Lucy. Together, they attempt to trick Ricky into thinking that Lucy is just as capable of running, fishing, and hunting as a man using the tools at their disposal – a car and the supermarket. The audience’s laughter when Lucy seems to have caught more fish than her husband seems to say, “Of course a woman couldn’t do that on her own!”

The episode ends when Ricky discovers that they both knew of each others’ schemes. He jokes, “I guess this makes us even?” Lucy acts as if she believed him. 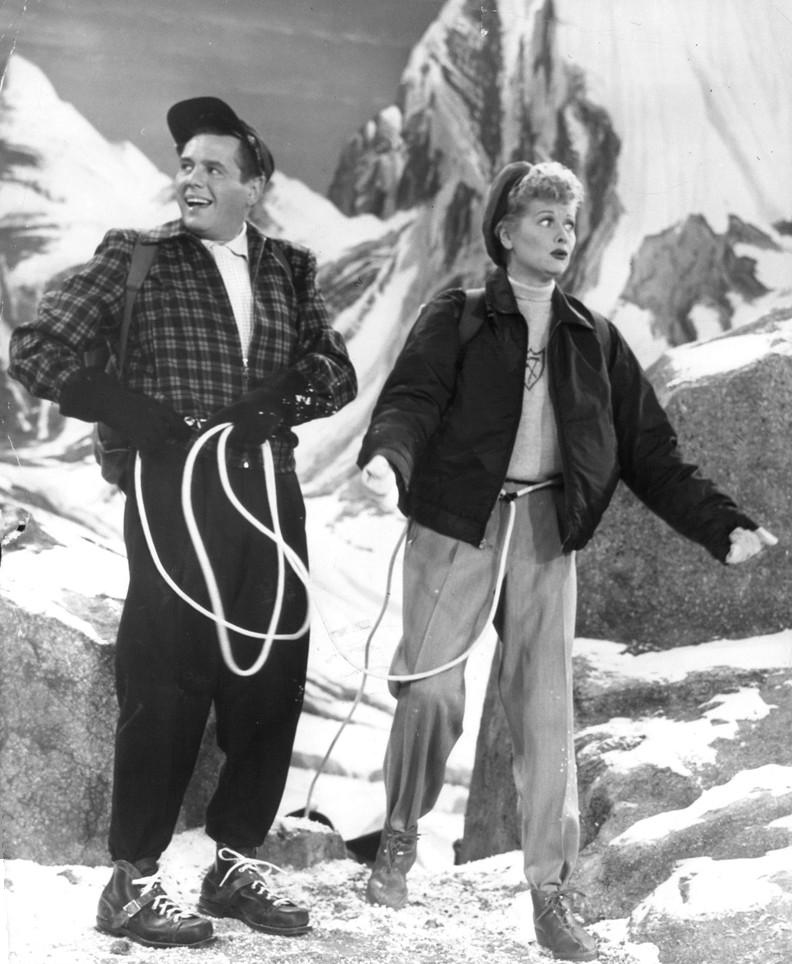 Lucy and Rick climb in the Alps during their 1956 European vacation. From a press release dated March 6th, 1956, and made available on Wikimedia Commons as part of the public domain.

I Love Lucy’s reliance on the contradictions between stereotypes and counterstereotypes ultimately makes the entire show’s humor hinged upon the image of the nuclear household pervading 1950s culture. Lucy wasn’t resisting an oppressive patriarchy, she was a naive housewife who couldn’t even succeed in pretending to belong anywhere but inside the home.

The television industry in Lucy’s era barely allowed an interracial marriage on television and considered the word “pregnant” too offensive for mainstream sitcoms. They couldn’t possibly have imagined that Lucy’s metaphorical grandchildren could have been an obese gay man with an adopted Asian daughter.

Over 50 years after I Love Lucy, Modern Family hit the airwaves. It isn’t so much a break from form as it is the next generation of the sitcom family Lucy has been credited with rearing. Even though its demographics – a soon-to-be-married gay couple, a middle-aged man whose second wife is a Colombian woman half his age, and a nerdy girl who seems disinterested in traditional beauty, among others – seem totally different from those in I Love Lucy, their traits and actions in the episode “Other People’s Children” are all evenly balanced mixtures of stereotype and counterstereotype.

Mitchell Pritchett and Cameron Tucker are two flamboyant gay men, who always wear neatly-maintained sweaters and button-down shirts and whose high-pitched voices are almost always being used to explain how everything they do is motivated by appearance and sex. They are also a loving couple with unconventional body types, and they don’t seem to have a problem with their daughter attending their wedding in a Disney princess costume.

Andy the babysitter’s muscles and crew cut give away his enrollment in the Coast Guard. He is also an extremely emotional boyfriend who is dedicated to making a cheesy, love-filled anniversary gift.

Claire Dunphy is a protective mother who works at home to take care of her children and family. She also hates fashion, greatly preferring jeans and plaid shirts to dresses and heels.

Though Modern Family’s mockumentary style doesn’t allow a laugh track, the awkward silences left in their place occur whenever anyone does something unexpected – that is to say, contrary to their stereotype: Andy is funny when he reveals his passionate, vulnerable side. Claire is funny when she reveals that she never wore a wedding dress. Manny is funny when he says something intellectual.

Almost every aspect of the characters’ personality and appearance is defined by generalizations. Just like I Love Lucy, the only time these characters diverge from sweeping racial and gender stereotypes, is when they act exactly the opposite.