This article was originally published on my Wordpress blog on March 5th, 2014, as a component of the final project for my Winter Term Media Studies class with the byline: "Alex Anderlik is a senior in the Class of 2014 at Phillips Academy but hails from Missoula, Montana. When he's not wasting time on the Internet, he's trying to figure out how to waste more time on the Internet. You can reach him at google.com/+AlexAnderlik."

As a regular news-reader with an interest in journalism, I am always trying to pay close attention to the lenses of the mainstream media which limit (or tint) the way we see the world, an event, or even a single person. I wanted to closely compare online news about a controversial topic from providers based in two very different physical locations as part of my final project for this term’s Media Studies class, and the Edward Snowden scandal of last summer seemed to be the most clear and interesting case to look at.

The most difficult aspect of this project for me was narrowing down the scope of my topic to find a reasonable assessment. At first I was interested in comparing the English and foreign-language news articles from not just two but three international sources, using Google Search and Google Translate to find what I was looking for. Not surprisingly, I was flooded by hundreds and hundreds of articles from each source, and it was impossible for me to separate the filter of Google Translate from the bias of content written originally in a non-English language. Every time I tried to start my project, I’d end up lost and confused with a dozen tabs open in several languages after just five minutes.

My breakthrough came in preparing for our in-class project pitches, which I was absolutely terrified of at first but after practice came to appreciate. We had to boil down the thesis of our topics and present them concisely to the class in just 60 seconds. Forcing myself to really figure out what was important, what I really wanted to do, and what this project was about, made me realize that using other languages and a variety of sources was just impractical. What I really cared about were the stories these news organizations were telling.

I focused on two news corporations, The New York Times and Russia Today. I stuck to their English content. I only looked at hard news reports. And I limited the date range to just the month of June 2013. Using Google’s Search Tools, I was able to find only pages containing “Edward Snowden” with those filters on the sites nytimes.com and rt.com.

I picked four from each and read them all, summarizing the ideas and copying some of the most interesting language from each into my notes. I used word clouds to organize each article by word count, which were somewhat interesting but weren’t really giving me a clear picture. One of the goals for this project was to build some form of media component which would make the invisible visible. I decided to look at each news organization’s articles and re-write their narratives, once for the New York Times and once for Russia Today, using only the information and quotes they gave me in the articles. I used the language, emphasis, information, even formatting from each news organization’s website for authenticity. 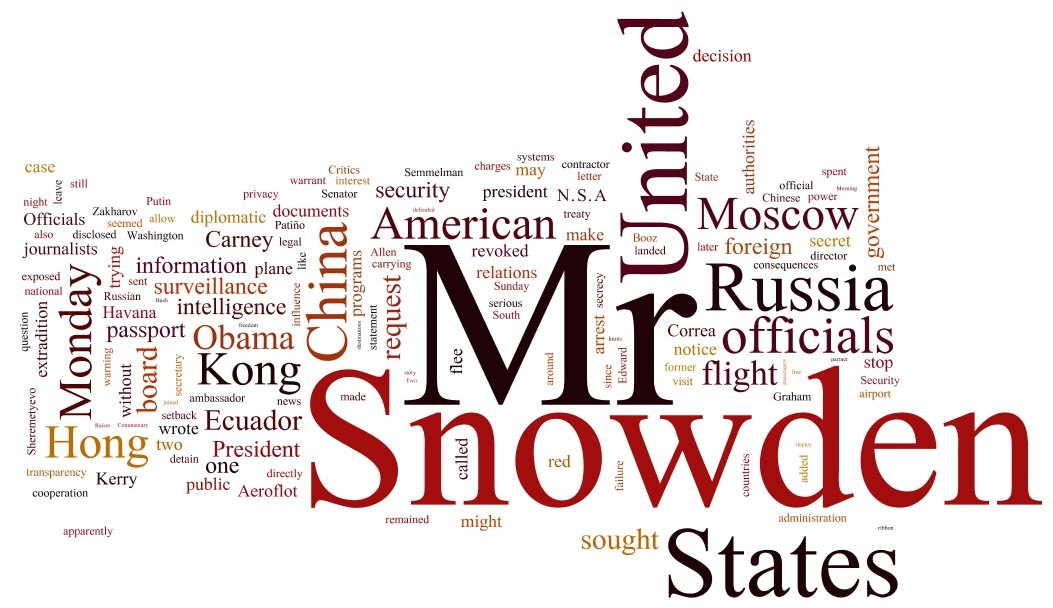 A word cloud depicting the spread of words found in a composite of articles written by the New York Times about Edward Snowden.

Ultimately, I found that just in this small sample size Russia Today and The New York Times were telling the same, yet completely different stories. It was as if they were both watching the same play, with the same characters, but one was standing in the audience and the other was standing backstage.

The New York Times tended not to focus on Edward Snowden at all, but rather the effect his actions had on the United States government and the political tensions caused by the scandal from an American perspective. The Times articles frequently used official government statements and interviews with politicians, and they tended to focus on the damage – or, at least, potential damage – he could cause for American international relations. The language The Times quoted was somewhat severe, as the “American authorities” were portrayed as ruthlessly seeking him down and threatening all governments who stood in their way. 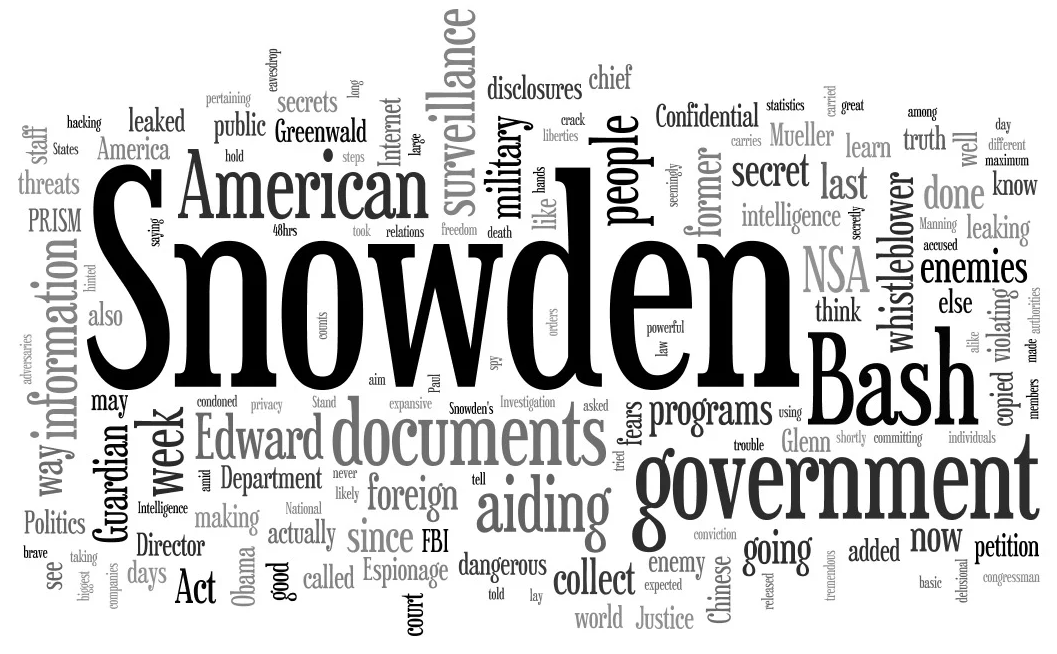 A word cloud depicting the spread of words found in a composite of articles written by RT about Edward Snowden.

Russia Today, on the other hand, seemed much more interested in what Edward Snowden and, to a lesser extent, officials from other governments had to say. Representatives for Russia and Ecuador were quoted, and both countries seemed as if they simply wanted to shove the problem on to someone else. Russia Today portrayed the United States as a bullying force but wrote that Hong Kong, China, Russia, and Ecuador each seemed confident in making their own decisions.

There was a consistent backbone of facts throughout both narratives, though: Edward Snowden, a young computer genius from North Carolina who was given unfettered access to top government secrets even as a low-level employee for a government contractor, decided to copy thousands of secret files onto a thumb drive and deliver them to The Guardian in time to escape to Hong Kong and ultimately Moscow. American officials tried to pressure Hong Kong, China, Russia, and Ecuador into capturing and returning Snowden, but they refused. The leaks continue and Snowden is safe in diplomatic limbo, but even he doesn’t think it can last forever.

In short, The New York Times was almost entirely written from the perspective of the United States government, while Russia Today seemed interested in presenting most perspectives except that of American authorities. While many of the facts were, strictly speaking, the same, the narrators and commentary on those facts were radically different.

This issue is important because it highlights the ways in which media organizations show us limited, and very different, perspectives. The New York Times was mostly just regurgitating statements from officials they had close access to, while Russia Today was mostly just regurgitating statements from Edward Snowden who just so happened to be stuck in Russia at the time. Both usually left out dissenting opinion, or gave it in an offhand fashion. Ultimately, this resulted in a sort of dichotomy: The U.S. versus the World. Spying versus Freedom. Freedom versus China. Whistleblower versus Leaker. Liberty versus Security. Good versus Evil.

After completing this project, I have actually become eager to read news stories from publications with a variety of locations, political affiliations, and histories. Not because they should all be respected equally, but because each of their perspectives exists. If Russia Today seems like propaganda for Vladimir Putin, great! Now I know what Putin wants his people to think, and what some of his people are thinking. If The New York Times seems limited and America-centric, maybe I can get a better understanding of why Americans think about themselves so much.

Even more importantly, I realized how awesomely easy breaking down these barriers can be. Through the Internet, I can get instant and unlimited access to these perspectives, and simply by reading several of them you can understand each one better. If the mission of newspapers is to give people the truth, maybe they’re not supposed to be one-stop sources of knowledge but open dialogues from different perspectives, made possible through the Internet.

Aggregated and filtered content, such as that delivered through Flipboard, Facebook Paper, and Google Newsstand, among other services, is worrying to me because it threatens to once again shut out dissident perspectives. People shouldn’t only read news from sources whose perspectives they share, and they definitely shouldn’t filter out the news which doesn’t immediately cater to their personal interests.

At least, that’s my perspective. But not the only one.