This article was originally published in The Phillipian on October 13th, 2011, with the byline: "Alex Anderlik is a two-year Lower from Missoula, Montana.

When I stepped out of South Station in downtown Boston, I saw a different kind of city – one made entirely of tents. This was the residence of several dozen protesters as part of the Occupy Boston movement, one of the many demonstrations inspired by the original protest on Wall Street, which has been going strong for nearly a month. 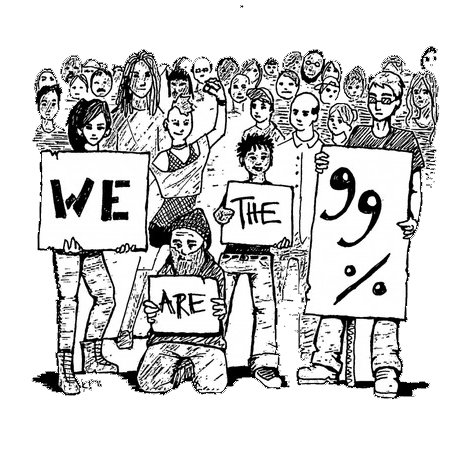 The Occupy protests were formed without any leader or figurehead and were organized almost entirely through social networking. Everyone I know, myself included, heard about the event not through word of mouth but through posts on Facebook and Twitter.

Hashtags precede the names of the events and help you keep up to date online. Connectivity and social networks propelled the protest from a crazy idea to a country-wide phenomenon. This is civil disobedience in the 21st century.

Along with a small group of friends, I walked through the group of tents in Dewey Square – complete with a library, kitchen, medical center, and media hub – to find a peaceful yet opinionated group of people of all ages, ethnicities and economic backgrounds.

They’re all here for their own reasons but are united by a single idea: reform. Many of the protesters are jobless or struggling to pay off debts due to the current financial crisis. Recall that the government tried to alleviate this crisis by bailing out massive corporations with billion dollar bills.

The Occupy movement may be best explained by the phrase “We are the 99%.” This campaign slogan is a reference to the highest class 1 percent of the American population who controls about 40% of the country’s wealth and, more specifically, those people who debilitate the democratic system by abusing their power through corruption and greed.

This can be a touchy matter at Phillips Academy, because there are many students on campus whose families are, statistically, part of that wealthy 1 percent. These families are caring and thoughtful and, more often than not, worked hard to be successful. In this way it is essential to draw the line between greed and aspiration.

A key part of making this movement successful is the solidarity of the upper class with their middle and lower counterparts. No matter your economic status, the corruption the that Occupy protests attack has affected your life as a citizen of the United States.

What better place to bring the issue than Andover? Phillips Academy is a rare community in which people of all cultural and economic backgrounds come together, the 1 percent and the 99 percent not just coexisting, but thriving as close friends. In this way, Andover is a perfect example of the kind of infrastructure the protests are promoting.

Here in our bubble, a large number of students aren’t aware of what is going on in the rest of the world. I think it is necessary to know that these protests are happening right now, all over the country on a large scale. Thousands of people are occupying city streets in virtually every major city in the country.

And essentially it’s happening for us. The youth. Right or left or in between, you need to know about it, and you need to act. Phillips Academy plays host to some of the brightest and most thoughtful students of our generation – and this event is an opportunity to prove our leadership.

The protest in Boston has only been in effect for a week, and next weekend I will be going back into Boston to follow the event’s evolution and see for myself what is in store for the future of the protests and perhaps the country.