This article was originally published in The Phillipian on November 18th, 2011, with the byline: "Alex Anderlik is a two-year Lower from Missoula, Montana."

If a college student tells you she’s majoring in “Underwater Basket Weaving,” these days she may not be far from the truth.

Dozens of colleges are offering courses such as “Learning from YouTube” and “The Strategy of StarCraft” as electives. The oddly-specific subject matter of these classes usually takes a popular item from modern culture and analyzes it using more standard viewpoints such as philosophy and science. 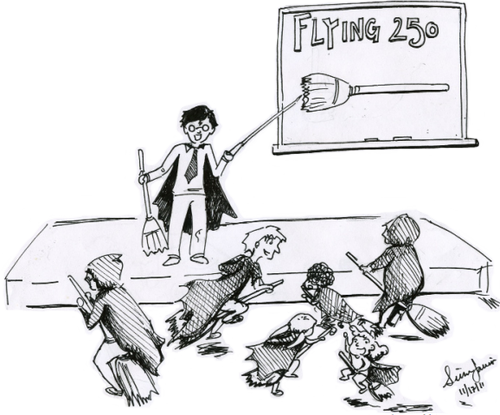 In particular, one class that stood out for me was “The Science of Harry Potter,” offered as an honors course at Frostburg State University. The course caught my eye primarily because it incorporates one of my favorite subject matters, the Harry Potter book series, with one of my weakest classes.

The course discusses the physics behind flying broomsticks and what it would take to genetically engineer a three-headed dog, as well as the relationship between the concept of magic and science.

What sets “The Science of Harry Potter” apart from a regular science class is its context – by using a popular literary source material, humanities-geared students can find common ground in what otherwise might be a totally foreign subject. Instead of being left in the dark, Harry Potter fans can learn science in a way that is relatable and relevant.

In fact, the class is designed specifically for those who are not science majors but who nonetheless have an interest in learning the mechanics of the world around them.

Why is this important? Modern culture is ingrained in the minds of young adults. We are exposed to it constantly through books, television and the Internet; we talk about it with our friends in Commons, and we think about it when we’re alone.

If it’s such a big presence in our daily lives, why don’t we bring it to the classroom? Instead of going to college just to get a good-looking degree, why not do it for the love of learning at the same time?

Many people know about the upperclassman elective discussing Bob Dylan and his cultural impact. From what I’ve heard from students in the class, the course isn’t just about listening to music; in fact, it involves a lot of critical thinking. The only reason it seems to stand out is its narrower context.

There are several other classes offered here with similar structures, but many of them are optional senior electives. These classes are all highly enjoyable and students in them tend to put in a lot of effort into their work. But should the concept of a more tangible, grounded focus be applied to more general classes? I think the answer is yes.

Take for example philosophy. It can be an intimidating subject, and for some it is very difficult to follow. But Kantian ethics might not seem so dry if we framed them around themes from movies such as “The Matrix” and “Fight Club,” because that way the class would explore in a structured and educational way what we’re already thinking about.

If you teach a subject your students are interested in, they’re more likely to be involved in class and retain knowledge. No longer do students need to excel in a subject to learn and be passionate about it.

Learning for the sake of learning seems to be a more and more disparaged practice in today’s society, but classes like these prove that anyone can enjoy a subject regardless of their strengths. And in my mind, that is what a good education is all about.